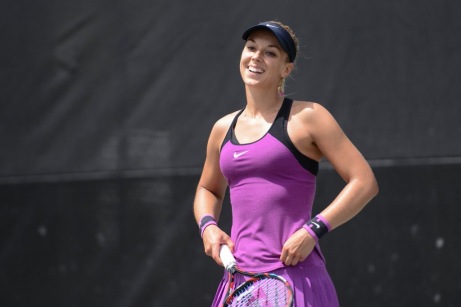 Sabine was defeated by Yulia Putintseva by the score of 5-7, 6-4, 3-6 in the second round of the Volvo Car Open. It’s another loss for the German, whose had a horrid start to the 2016 season. While it’s a tough one for Team Lisicki, I’m sure many would take getting the victory she had in the first round. It snapped a three match losing streak and put her in a great mood after the match. Seeing her happy and smiling again on court filled Team Lisicki with lots of joy.

There’s many things to say about her current state, but let me first start with what happened in Miami. For your memory, Sabine lost the match after being up 5-0 in the third set. After the match my mind raced at how it would impact her and I grew deeply worried for her. I thought about writing something, just for her, but upon seeing her tweet often, I decided I didn’t need to. Usually after tough losses she isn’t on social media for a while, so seeing her get on immediately showed me she was alright and put the project on hold. She put what happened in perspective and, while it hurt, she was moving on from it. She must’ve had great support from her team at the time.

As for the Putintseva match, it’s hard for me to say exactly what went wrong. I had to juggle a lot of things during her match, so I wasn’t able to give my full attention to it. I didn’t really know how the matchup would be for Sabine, as I don’t know much about Putintseva’s game, and didn’t get any clearer idea after this match. I do have some thoughts on it though.

Early on Sabine struggled with her first serve. Later I looked and her first serve percentage was into the 60’s. I believe she just started spinning in more and more serves, so she wouldn’t have to hit second serves. Her first serve was 74% in the third set, but she only won 47% of those points. Usually that number is well over 50%. Also, she only hit one ace in the match. The serve is currently a major issue. It wasn’t even that reliable in her win against Falconi in the opening round, where she only got in 39% of first serves. Sabine needs as many first serves and free points as she can get on clay. Starting rallies is not her game style, especially on clay. She needs to sure up this serve and start hitting big more often.

One new thing I noticed is what I believe is a major issue for her: footwork. Sabine hits the ball so flat that she needs to be in perfect position each time she hits the ball. For me, I believe the lack of little steps is the reason her error numbers are high. She seems to be working hard off the court. I think she should focus on footwork drills.

The thing about footwork is that your feet stop moving when you get nervous. Sabine mentioned she was nervous closing out the match against Falconi. It probably happens quite a bit with her. Chris Kas told her during an on court coaching session that Sabine needs to be courageous with each shot because she’ll be less likely to miss if she believes she’ll make it. Instead, she worries about missing, thus, she misses. It’s the worst combination to hit the ball flat, not have the best footwork, and have issues with nerves coming into play. No wonder she goes on stretches with many unforced errors. 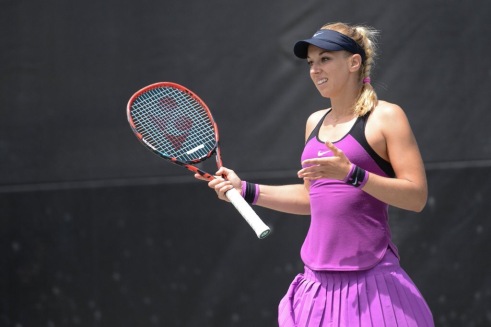 There’s been some troubling trends too. First and foremost is her record is three setters. She’s 0-6 this year. In her career she’s significantly better in two set matches than three set matches. This is more than just a problem of coming back from injury. It’s been a problem her whole career.

Also, she hasn’t played one player ranked in the top 20 this year. Hasn’t played a seeded player at any tournament. The highest ranked player she’s faced this year was #25 ranked Svetlana Kuznetsova in Sydney. So it’s not as if she’s running into bad draw luck. Every match she’s played this year, including Hopman Cup matches, have been winnable on paper. Yet she’s 5-7. Three of those wins come against players ranked outside the Top 100. The highest ranked player she’s beaten this year was #73 ranked Polana Hercog. If Sabine hadn’t lost to #96 Naomi Broady in Kuala Lumpur, it’d be a perfect correlation of ranking to winning or losing. She’d have beaten every player she faced ranked 73 or lower and lost to every player she played ranked above 66, not facing anyone in between.

This is part of the reason why I’d have liked to Sabine pick up an ITF event or perhaps even a Bogota wildcard. She’s having trouble against mid-ranked players and only picking up wins against low ranked players. She needs to play a lot of them to get some matches, wins, and confidence. The more she plays, the better she’ll become in tough situations. That’s also keeping in mind what’s to come. Her next tournament is Stuttgart, which is always a loaded field. Chances are she’ll play the highest ranked player she’s faced all year in her first match and that’ll be her only match in Stuttgart. So now we’ve let two weeks go by with only one match that was against someone out of her class at the moment. She only played four matches in about a month in the United States. It’s not like she’s tired. Matches are the only way she’ll get better. Then it’ll be a Premier Mandatory and Premier 5. She’ll be facing players out of her league. The tournaments will be tough until Nurnberg. Not getting nominated for Fed Cup provided the perfect opportunity to try to get ahead. Now it’s gone and a tough month is in store.

I hate to say it, but I hope she has to play qualifying. I wish she’d play it in Stuttgart. It’d give her the best chances of winning a match and gaining ranking points. Winning a main draw match would require a lot of luck. Same applies to Madrid and Rome. Looking back at Miami, I even think getting a seed was unlucky, after initially thinking it was lucky. She’d have been better off having to play her first round match, rather than get a bye. It’s not like the ranking points are any different if you lose in the first round or in the second round (with a bye). She had to play someone who was more match fit, having already won a match in the tournament. It’s not like Sabine needed a bye because she was going far in the tournament. 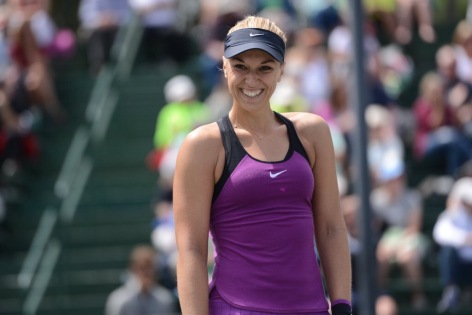 I became a fan of Sabine when I decided I wanted to be a fan of someone who would go for their shots and had the ability to beat anyone. That and Sabine’s personality hooked me. Just watch that after match interview she gave when she beat Falconi and you’ll fall in love too. I feel like now, about four years into her being my favorite WTA player, I’m finally realizing all her imperfections. My favorite ATP player, Nole, probably didn’t help the situation with his seemingly perfect play over the past 19 months. Nole can win a match in so many different ways. I’m realizing Sabine isn’t able to do that and that’s why she so often loses matches it doesn’t seem like she should. I saw a quote from Martina Navratilova that said “the mark of a great sportsmen is not how good they are at their best, but how good they are at their worst.” Sabine’s worst can’t beat many players. She needs to produce her highest level to win matches and go deep in tournaments. I fell for Sabine’s best play, without any understanding of what her worst actually was. You can’t play your best every time or even most of the time. That’s why it’s so important to be able to win ugly.

Sabine doesn’t have a champion mentality. Those type of players get mad about a bad shot, even if they’re up a set and a break. They have to be that way if they want to win as much as they do. Sabine would laugh in a similar situation and I’m perfectly fine with that. That’s what normal people do. And who doesn’t love to see her smile? It’s part of the reason why she’s a popular player. But that type of mentality might be what holds her back. I’d love to see her accomplish all I know she’s capable of achieving. I can tell at least some of the reasons why she hasn’t achieved what she’s capable of. The biggest reason may be what I, and many others, love most about her.

The thing is, no matter how aware I now am of all Sabine’s faults, I can’t like any other player more than her. I may not always like the shots she hits, or how she plays certain points, but she’s irreplaceable. Even the other players I like (Simona Halep, Elina Svitolina, and Daria Kasatkina) don’t come close to Sabine with me. I like them and I root for them, but the amount of emotional investment is always significantly less. As long as Sabine plays, I don’t see myself liking anybody more. All those other players will probably win more matches than Sabine and be ranked higher in the years to come, but other faves winning can’t change how I feel about Sabine. Sabine’s losses probably just draw me to her even more. 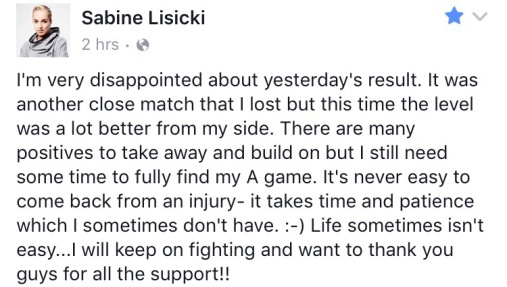 Sabine has been very good lately about keeping up with social media accounts and giving us fans an idea of what’s going on, as can be seen in the Facebook post above. She tells us it’s tough after injury to comeback to playing her best and she needs some time to find it. That’s perfectly understandable and will give us all a new perspective going forward. It’s a process. There’s plenty of examples of injuries to players that took a while to get back to their top level.  It took Azarenka years. I see Dominika Cibulkova as more comparable to Sabine though, in terms of play and career achievements. It took Domi a while to start finding her game again after she missed most of the early hard court season and clay season. She struggled after coming back last year, but has played great in 2016 so far, including winning the Katowice title today. We want Sabine to have big results quickly, but we have to respect that getting back to where she was takes time. Domi has been able to do it. Sabine can too. We just have to trust it’ll eventually turn around. It may include things we don’t want like a slipping ranking, missing the Olympics, and playing qualifying rounds, but eventually the wins will come and she’ll get back to where she was. As always, we’ll be watching and supporting her until she finds her best tennis then we can finally have some fun. What a time that’ll be 🙂